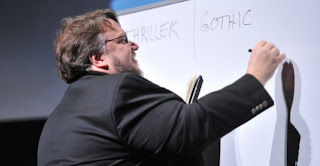 Recently, director Guillermo Del Toro was in Toronto at the Lightbox Theatre to teach a sold-out crowd about the genius of Alfred Hitchcock. I was there. I recorded the whole thing, and now I'm sharing it with you. Enjoy!

In fact, Del Toro has been in Toronto for almost two years (!) filming his giant-robots-versus-aliens movie, "Pacific Rim" and had not been feeling too well. On this night he was displaying symptoms of a flu-like bug that had been nagging him for some time, but that never got in the way of him enjoying himself or blowing our minds with his keen observations and disarming humour. He's a really funny, insightful, excitable and witty professor. He has studied and taught the works of Hitchcock most of his adult life and published a book on Hitchcock -which he is in the midst of re-writing- back in his twenties. Clearly he's a fan and clearly he adores and respects the entire catalogue of Hitchcock's work. He revealed that he had taught film at the Guadalajara University and absolutely loves to teach, (Especially film. Especially Hitchcock) saying he'd do it every day if he had the time, and even vowing to teach another master class every time he was filming in Toronto. So what a treat it was for the 500 or so of us that filed into auditorium #1 at TIFFs new Lightbox Theatre.

I have to tell you that this was an incredible steal at 25 bucks. I strongly encourage you to watch the calendar on Tiff.s website to make sure you don't miss their special event programming like this. Two hours with one of the most interesting filmmakers alive was worth the price of admission alone, but the night also included a full screening of one of Hitchcock's films, and a Q&A to close out the event. I attended the final of four nights and the film featured was "North by Northwest", arguably Hitchcock's most accessible and perhaps lightest fare. I regret not going every night, and almost wish I'd gone on any of the other nights when some of his more challenging fare such as "Rebecca", "Frenzy" and "Shadow of a Doubt" where played. From what I understand, during those nights he really tore down Hitchcock's methodology and evolution as a filmmaker, whereas this night was more generalized and accessible much like the film shown - a film that Del Toro himself described as "a beautiful Toy."

I've laid out this page so that you can experience the evening much the way I did. It happened in three parts: First, "professor" Del Toro took the stage and spoke about Hitchcock for about an hour. Then we watched a pristine copy of North by Northwest on the big screen, and finally he addressed the auditorium again, closing out the last hour with a Q&A session. Have a copy of the film ready to go.

PART 2) Hitchcock Master Class w. Guillermo Del Toro Screening of "North by Northwest"
Now watch the movie. Crack out your North by Northwest DVD's or stream it from a sight like this if that's what you are into.

And finally, here's an article from AVCLUB.COM on Del Toro and the event. It's an interesting read and it helps augment the entire experience a bit, so take a few minutes and have a look right here.

Thanks for investing the time. I hope you found it as rewarding as I did.