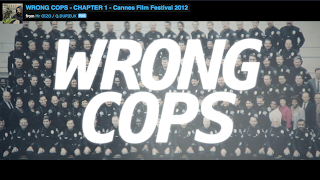 I love director Quentin Dupieux's unique brand of provocative insanity. This past week at the Cannes Film Festival, he premiered a short film called "Wrong Cops" and it's all kinds of fun. He's been cool it for everyone to enjoy, and it seems to be the first of a series of Wrong Cops vignettes.  I hope you've got the 13 minutes to check it out:(*Warning NSFW - potty language and bad attitudes)

Click here or on the above photo to watch "Wrong Cops"


Although I have yet to see his latest feature, "Wrong" , which has only recently made the festival rounds, I strongly suggest you to seek out and watch his 2010 film, "Rubber".  It will be unlike any other film watching experience you've ever had. And I mean that in a good way.


Here's the trailer for "Wrong":
And a link to the IMDB page on "Wrong"


Here's the trailer for "Rubber".
And the IMDB page on "Rubber"

And finally, here is the music video that originally made Mr. Dupieux famous as the DJ/musician known as "Mr. Oizo". It features one of my favorite puppets ever, "Flat Eric"! Enjoy!

P.S. Flat Eric actually became a spokesperson/celebrity for Levi's back in the day and you can see him featured in several of their commercials and other Mr. Oizo music videos as well. Search Flat Eric on YouTube. Do it now!