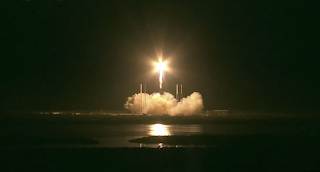 At 3:44 a.m. SpaceX successfully launched its Dragon capsule into low Earth orbit atop its Falcon 9 rocket and in doing so, became the first private company in history to send a spacecraft to the International Space Station. It's kind of a big deal.

Video after the break


"Today marks the beginning of a new era in exploration; a private company has launched a spacecraft to the International Space Station that will attempt to dock there for the first time,"said NASA Administrator Charles Bolden in a speech delivered at Cape Canaveral, where the Falcon 9 launch vehicle's engines rumbled to life this morning. "And while there is a lot of work ahead to successfully complete this mission, we are certainly off to good start."

So far, Falcon 9 and the Dragon are in orbit, and the Dragon has successfully deployed its solar arrays. Over the next few days, the Dragon will orbit Earth and then begin its approach to the International Space Station. The craft will then undergo intensive sensor and flight system testing and, if that goes well, it will approach the ISS on Thursday for final tests. The big day comes Friday when, if absolutely everything has gone to plan, Dragon will dock with the ISS. And that's an even bigger deal.