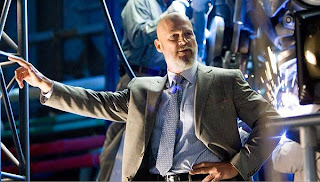 There's a pretty interesting article over at FILMDRUNK.COM where Jeff Bridges is quoted as saying that there was literally no real script or written dialogue for the first Iron Man film. He also goes on to say...
“You would think with a $200 million movie you’d have the sh-t together, but it was just the opposite. And the reason for that is because they get ahead of themselves. They have a release date before the script, ‘Oh, we’ll have the script before that time,’ and they don’t have their sh-t together.’”

The whole article can be found here.