HENSON AND DEL TORO TO TAKE ON 3D PINOCCHIO 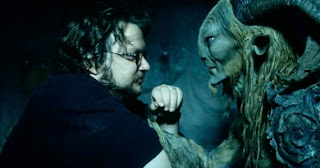 So here's some cool news: Apparently Guillermo Del Toro (HellBoy, Pan's Labyrinth, other cool shit) has been working with the Henson Workshop (The source of all things wonderful in the universe) developing a 3D, Stop Motion Pinocchio project. Better yet, it's actually going to happen. And it's chock full of awesomeness...

More after the break.

Back in February 2011, it was announced he would produce the film – which is based on a darker treatment of Carlo Collodi’s partly-serialized 19th century novel “The Adventures of Pinocchio” – that del Toro co-wrote, in collaboration with Gris Grimly (the short “Cannibal Flesh Riot”) and Matthew Robbins. The latter also co-penned del Toro’s Mimic and collaborated with the filmmaker on the script for the Don’t Be Afraid of the Dark remake.

Reports are in that del Toro has decided to just go whole-hog on Pinocchio (fully titled… well, Guillermo del Toro’s Pinocchio) and co-direct the picture, alongside Fantastic Mr. Fox animation director Mark Gustafson. Special effects will be handled by MacKinnon and Saunders (Corpse Bride), while eclectic rocker Nick Cave will serve as a music consultant on the project.

It probably goes without saying: del Toro’s Pinocchio is going to go beyond even Collodi’s source material, as far as being a darkly twisted and often surreal children’s story (or something like that…). Besides some macabre character changes, such as making the Blue Fairy the spirit of a deceased girl, del Toro previously announced his intention to deliver an interpretation of Pinocchio that functions more like a traditional fairy tale. To quote:

“The key with this is not making any of it feel gratuitous, because the story is integrated with moments of comedy and beauty… There has to be darkness in any fairy tale or children’s narrative work, something the Brothers Grimm, Hans Christian Anderson and Walt Disney understood. We tend to call something ‘Disney-fied’, but a lot of people forget how powerfully disturbing the best animated Disney movies are… What we’re trying to do is present a Pinocchio that is more faithful to the take that Collodi wrote. That is more surreal and slightly darker than what we’ve seen before.”

Inferno will present Pinocchio to buyers at the upcoming 2012 Cannes Film Festival. Given that the animated production is looking to reach theaters by either 2013 or 2014, it stands to reason that this will mark del Toro’s followup to next summer’s Pacific Rim – as opposed to the Emma Watson-starring Beauty and the Beast retelling, or any of the other fantasy/horror projects that the filmmaker is tentatively attached to. 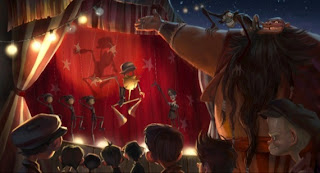 Even though the idea of del Toro leaving his mark on a new version of Pinocchio – as brought to life by some stylishly creepy puppetry – sounds great, it will do little to abate concerns that the Oscar-nominated storyteller is spreading himself a little thin. While del Toro has completed his producer duties for several DreamWorks computer-animated flicks released over the past two years (Megamind, Kung Fu Panda 2, Puss in Boots), he still has the new Incredible Hulk TV series on his plate; not to mention, projects like Disney’s Haunted Mansion reboot and a long-gestating Frankenstein adaptation, which del Toro has been linked to for years now.

On the other hand: most impending del Toro projects only involve him in a producer or artistic consultant role. Seeing how his planned At the Mountains of Madness adaptation may never come to fruition (partly due to its shared traits with Ridley Scott’s Prometheus), del Toro should be better able to focus his attention on finishing Pacific Rim and setting to work on Pinocchio – rather than keep looking ahead to future projects.
Posted by Unknown at 19:43