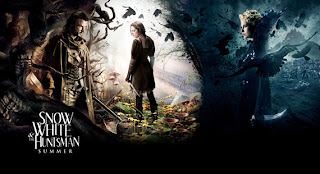 The central concept behind Snow White and The Huntsman was more than worthy of all the effort and money thrown behind it, but unfortunately a lazy script and a dial-tone performance by one of the leads killed any hope of it being great.
Read my review after the break.

As the trailer for the "final chapter" of Twilight played before SWATH started, I chuckled. Even the trailers are laughably cringe-worthy, and should have been career cancer, yet somehow, Kristen Stewart was given yet another lead role in a major Hollywood film. And I admit I don't get it.

SWATH could have been great. There were some pretty strong ideas explored and the basic idea of a Lord of The Rings-ish retelling of this classic fairy tale still seems like a good idea to me. 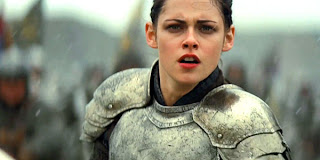 I stare blankly with my mouth open. 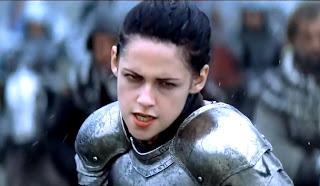 Then I cock my head and run at it with my mouth open.

Somewhere along the line, the project lost its way and collapsed under its Hollywood-scale girth, becoming a lazy, confused, Lord of The Rings wannabe with little focus or opportunity to really enjoy our time with the classic characters and conceits that are being so consciously exploited.

I must say the film starts quite slow and any movie having to rely on a voiceover explaining its setup - especially one we already know - is a film that knows it's in trouble.  We quickly get introduced to Snow White's family, her picture - perfect kingdom, and in a concise series of short scenes, watch it get overthrown by traitorous Ravenna, aka the Evil Queen. Once the film settles in, and gets past its clumsy voiceover-driven opening, things get a little more familiar and arguably... better. For all of its familiarities, the creators have taken quite a number of liberties with the story and it's those liberties that I think troubled the film to a point where no amount of special effects and slick design work could save it.

There are a number of characters created specifically for this reboot/retool/restart of the famous fable; some work, some fail miserably. A brother for the Evil Queen, named Finn and played by Sam Spruell, works nicely, giving the Queen a reach beyond her chamber walls and someone for her to interact with as things play out. He looks creepy and acts creepy and does creepy things. The device work nicely, but conversely, the addition of Snow White's childhood friend, William, played by Sam Claflin, is a frustrating waste of time. He is this version's Prince Charming I suppose, but is in fact, not a prince, but the son of a Duke and NOT the one that revives Snow White from her poisonous sleep. He sadly serves only to bog the film down and steal screen time from other concepts that actually do work. 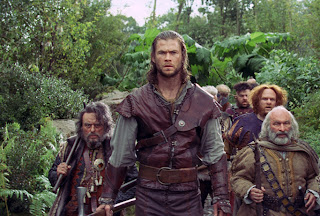 
Fortunately some of the classic elements, such as the dwarves, although heavily reworked, are are a lot of fun to watch. Led by the always wonderful Ian McShane and featuring a colossal combination of talent including Bob Hoskins, Ray Winstone, Nick Frost, Eddy Marsan, Toby Jones and Johnny Harris, the characters are handled reasonably well on paper, the visual FX employed to give them their dwarf-ish proportions work seamlessly, and the actors' skills clearly elevate every scene they're in. The dwarves must have been one of the most expensive and difficult ingredients to bring to life and are in fact one of few that are very successful. It's shame they didn't get to do more.

Sadly, the script is a bit of a mixed bag and is more miss than hit. The writers seem to be in a hurry to broaden the scope of the story, diluting everything that's great about the fable they started with. For example, the seemingly endless traveling montages were not only unnecessary, but paled in comparison to the actual Lord of The Rings films they were so obviously stealing from. Why copy other works when you are sitting on one of the most famous stories ever told? Similarly, I was not a fan of the fairies that our heroes come across on their journey, and found them neither magical nor enchanting, but both creepy and derivative of other works, specifically that of Hayao Miyazaki's Princess Mononoke (a better film than this by far). And the dialogue really began to grate on me as well, lazily wandering back and forth between a formal pseudo-period verse and a more modern vernacular with no apparent loyalty to either. Just make a choice and stick to it. Inconsistent and illogical moments are pretty common: In one scene Snow White escapes her captors by outsmarting them and eventually leaping into the ocean. As she leaps, we see that beneath her prisoner frock, she's wearing pants. Huh? Later, when the Huntsman tears the skirt of the frock off because it's constantly getting tangled in thick brush, it becomes obvious why she's wearing the pants: It's just a lazy anachronism that they needed to make other equally lazy choices work. There's also no logical explanation for a suit of armor showing up that perfectly fits her or how - after being imprisoned most of her life with no contact with anyone else - she's competent with a sword. Clearly the marketing team wanted that image of Stewart with the sword and armor on the poster, and the script suffered to make that possible.

There are also major logistical issues with this film that seemed equally lazy. Making the choice to employ a style that is more grounded in reality, means you need to keep our real world time and space limitations in mind too. SWATH is packed with laughable moments where characters appear at just the right time in just the right place to make the just right things happen. And despite a character illustrating clear preferences or patterns at earlier points in the story, when the script needs them to do something illogical, or completely out of character,  they do it. It's all painfully convenient. 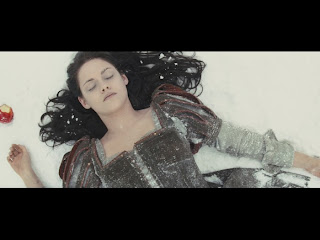 She doesn't get any more animated than this.


Thank goodness for Chris Hemsworth. He absolutely carries the show and without a doubt has become one of the most watchable "action figures" to emerge in recent years. Whether it be with an axe or a hammer, he can effortlessly make the necessary cool battle moves look real and can even deliver clunky dialogue effectively. I can only imagine how bad this thing would have been with say, a Channing Tatum in that role. Charlize Theron is another favorite of mine, but doesn't fare as well. I'm sad to say she's not great in this, and in fact seems to be in a completely different film than Hemsworth, but at least she's easy to look at and gets to wear some awesome clothes. She never fails outright, but spends a lot of screen time yelling and pacing about in a performance that gets dangerously close to "mustache-twirling" levels of villainy.

But it's the vacant, nearly absent performance from Kristen Stewart that really kills the entire piece. I'm absolutely certain that if I could read a copy of the script, I could prove that a ton of her dialogue has been cut from the film. She rarely speaks throughout, and I find it hard to believe that anyone would have written a feature around a titular character that can, but doesn't speak. When you see Stewart struggle with a pivotal monologue, you instantly understand why an editor would cut every possible line from her performance. She's given a classic "inspire the masses" speech to deliver and clearly has no idea what to do with such a moment,  ultimately making the hollow choice of yelling through it. For the most part, her performance is composed of simply reacting to things; staring blankly off screen with her mouth open, or cocking her head before moving away from or towards whatever she as just staring at. A marionette would have been more interesting to watch. For a fairy tale princess, even a "gritty re-invention" of a fairy tale princess, Stewart has no elegance, no poise and moves woodenly through her scenes with all the grace of a garbageman. It's not fair to say she's ugly. She's not, but the number of truly stunning and talented young actresses emerging right now is staggering and literally dozens of other choices would have helped make this film work. If you see the film, consider this: In the opening scenes, an actress named Raffey Cassidy plays the role of young Snow White and that little girl generates a performance that is more interesting, honest and just plain watchable than anything Stewart can muster throughout the remainder of the film. The film's director, Rupert Sanders is a first timer to features, being most famous for directing commercials and music videos and such. I think he did well enough to guarantee another shot at the big times and I'm pretty sure most of my complaints were not of his doing. In the end, before cameras began shooting, those in charge needed to give their collective heads a shake and try harder to understand how to make this project great. They didn't, and it isn't.