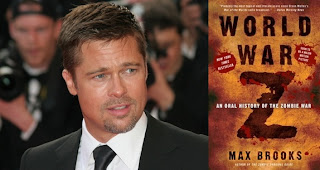 According to DailyMail.com, zombie blockbuster World War Z, starring Brad Pitt, based on the bestselling novel by Max Brooks is not in good shape and an additional seven weeks of reshoots have been scheduled to correct whatever horrible problems are ailing that project. An entire movie can be shot in that time, so I'm guessing that an early cut of the film has scared the living bejeesus out of whomever is in charge. They had already pushed the release date back from December 2012 to June 2013, so this shoot sounds like it's been deep in the weeds for a while. Here's hoping that after all the extra effort (and money!), they actually do that awesome book some justice.