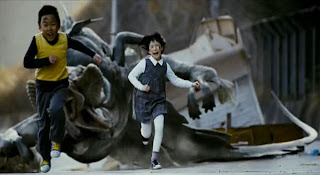 Damn that if that awkward, drunk puppy mutant monster isn't still one of the most original creatures put on screen since The Creature from The Black Lagoon. Love it. Come to think of it, picture the classic Creature walking a pug-sized one of these on a leash. I know! Adorable, right?

Anyhoo, check out the footage below and if for some really odd reason you haven't seen the original THE HOST (GWOEMUL) film, then set your life right and get on that. Yes, it's in Korean and there will be subtitles.

And here's a link to a solid streaming site if you can't find a hard copy. You're welcome.

Email ThisBlogThis!Share to TwitterShare to FacebookShare to Pinterest
Labels: Gwoemul, Movie Magic, Movie Monster, The Creature from The Black Lagoon, The Host, The Host 2