"THE MASTER" ALREADY HAS A HOLD OF ME 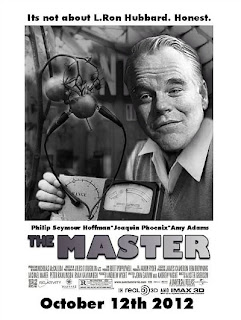 Paul Thomas Anderson's "There will be blood" literally blew my mind. I found myself grinning through most of my first screening because it had been a long time since I'd felt that excited and arrested by a cinema experience. So when I discovered that his follow-up would be called "The Master" and very much "inspired by" the early years of Scientology and specifically it's deranged founder L. Ron Hubbard, I couldn't wait. And now the wait is almost over. The first clip is up and it does not disappoint.


The Master features an impressive cast anchored by the always fascinating Philip Seymour Hoffman, but the first clip is all about Joaquin Phoenix, back to form after the near career-killing choice of  doing "I'm Still Here". Have a look and keep your eyes peeled for "The Master", set to hit theatres late this year. Here's the film's website.


The film showed up on my radar at a blog called Hollywood-Elsewhere.com and here's the article they ran on it. It's got some interesting insights into just how careful Anderson is to distance himself from Scientologists who may have something to say about the film. It's not about Scientology. But it is. But it isn't. Get it? Wink. Wink.